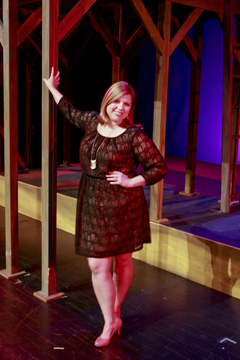 As a stage director, Jenna’s focus is on utilizing lyric theatre to enact social change. She is the co-founder and Artistic Director of Glow Lyric Theatre, a vocal arts company producing opera, operetta and musical theatre in direct response to the social and political climate of South Carolina.

Some of her groundbreaking work in her community includes producing and directing a re-imaging of Gounod’s opera Romèo et Juliette that sparked dialogue about the treatment of immigrants and refugees in the south. Jenna collaborated with two prolific non-profits, Jasmine Road and Safe Harbor, on her recent productions of Best Little Whorehouse in Texas and Carmen, illuminating the effect of sex trafficking and domestic abuse on women in the South. Other recent credits include Frog and Toad with Synchronicity Theatre, Spring Awakening with The Warehouse Theatre, and Guys and Dolls with Arkansas Shakespeare Theatre.

With a passion for devised theatre, some of Jenna’s original works include Armed, a performance of testimonial and song that responds to and reflects on the immediate issue of gun violence in the US, and Twenty Caged Nightingales Do Sing, a re-imaging of Shakespeare’s Taming of the Shrew following a gender questioning Kate. Jenna created Pulse with Anam Cara Theatre Company, a devised piece exploring the effects of the mass shooting in Orlando on the LGBTQ community. Jenna is responsible for the original conception of Scène de Carmen, a cabaret-style adaption of Bizet’s opera Carmen. Scène de Carmen has since been produced by LOLA opera in Austin, Texas and Lawrence Opera Works in Kansas.

Jenna is a recipient of the Robert Porterfield Directing Award from the Southeastern Theatre Conference, and was a finalist for the Drama League New Musicals Fellowship. She was accepted into 2019-20 Society of Stage Directors and Choreographers Observership Program. Jenna holds an MFA in Directing from Florida State University.